BRIEF HISTORICAL SUMMARY: The Fox Terrier in both forms, Smooth and Wire, is from British origins and probably owes its existence to the same types of dog which produced both the Bull Terrier and the Black and Tan (now Manchester) Terrier. Uniformity of type was established in the late 1800s and the original standard for the Fox Terrier drawn up in 1876. One of the most lively and alert of terriers, refinement to his present show excellence has not allowed him to become unsound. Capable of standing up to any amount of exercise, always ready to deal with rats, rabbits, and, of course, foxes. 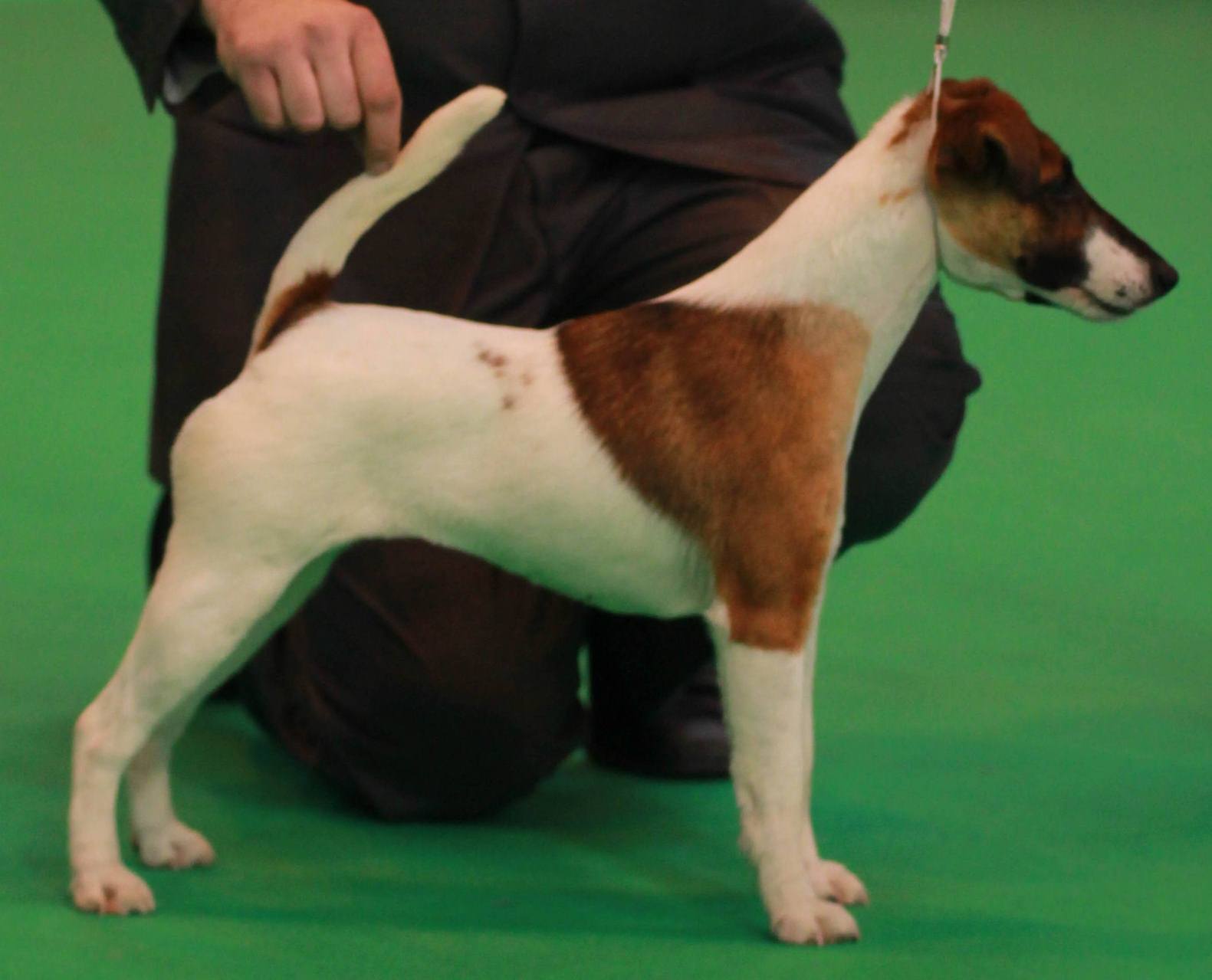 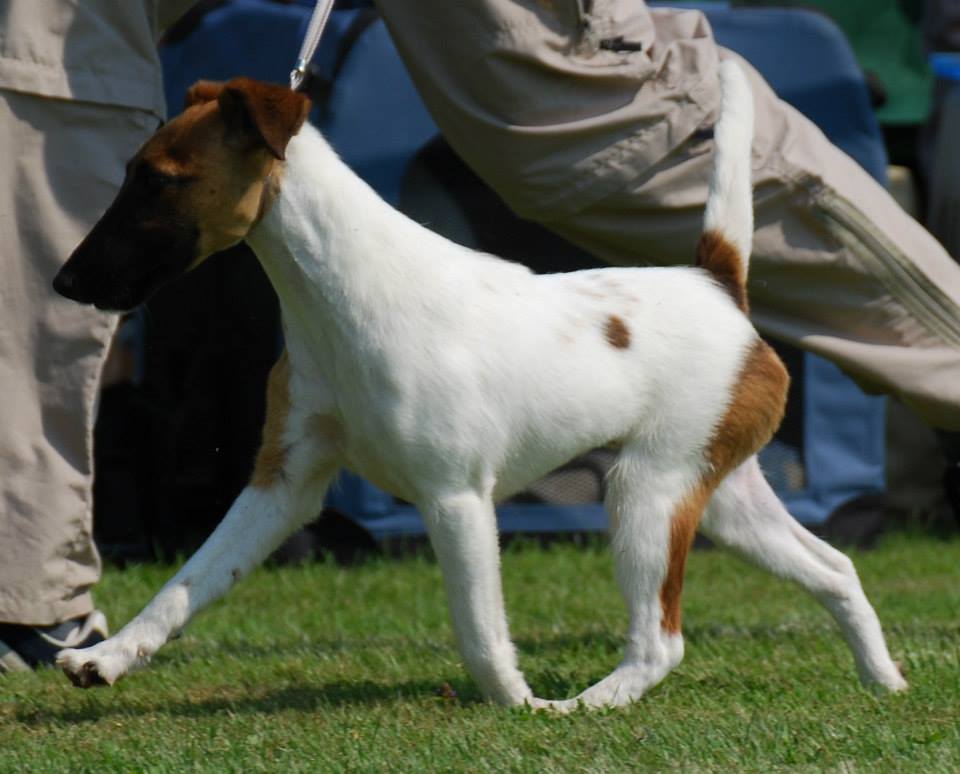 GENERAL APPEARANCE:
Active and lively, bone and strength in small compass, never cloddy or coarse. Neither leggy nor too short in the leg, standing like a well made, short-backed hunter, covering a lot of ground.

BEHAVIOUR AND TEMPERAMENT:
Alert, quick of movement, keen of expression, on tiptoe of expectation. Friendly, forthcoming and fearless. 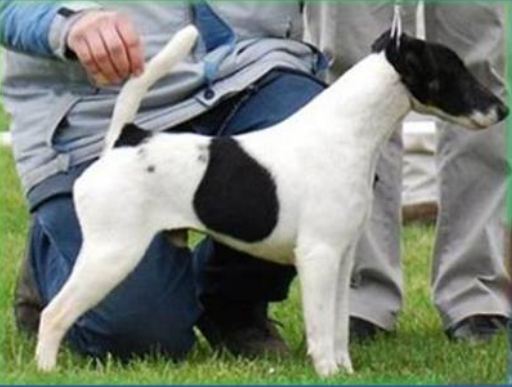 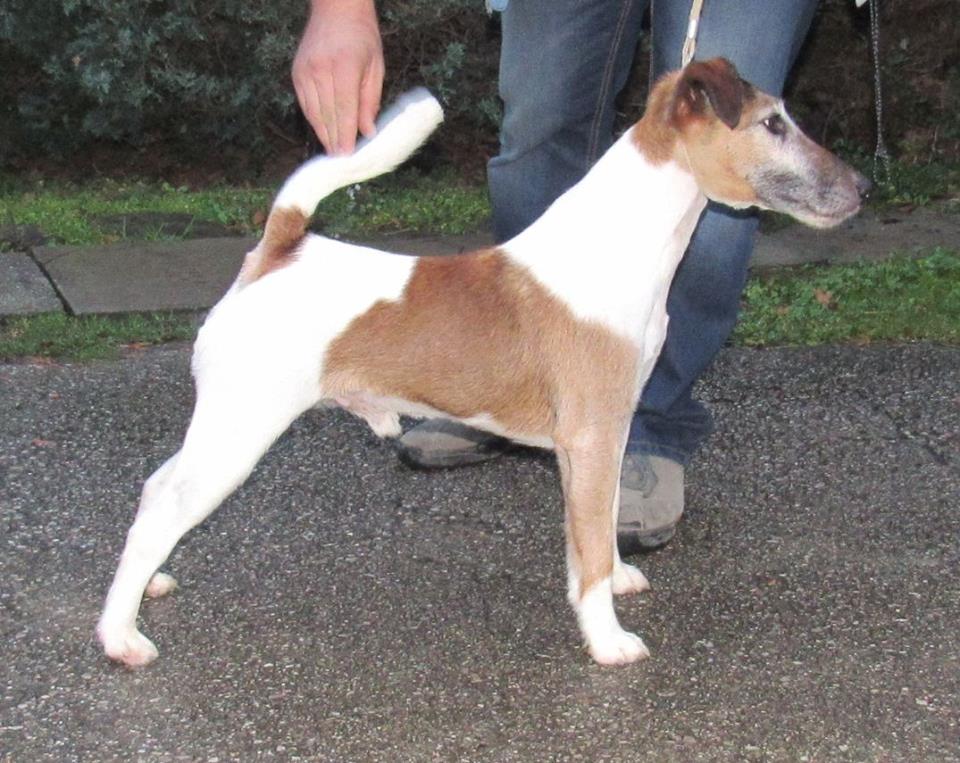 FACIAL REGION:
Nose: Black.
Muzzle: Jaws, upper and lower, strong and muscular, falling away only slightly below eyes. This portion of foreface moderately chiselled out, so as not to go down in a straight line like a wedge.
Jaw / Teeth: Jaws strong with a perfect, regular and complete scissor bite, i.e. upper teeth closely overlapping the lower teeth and set square to the jaws.
Cheeks: Never full.
Eyes: Dark, moderately small, as near as possible circular in shape but not prominent. Expression bright and intelligent.
Ears: Small, V-shaped and dropping forward close to cheek, not hanging by side of head. Fold of ear above level of skull. Leather of moderate thickness.

NECK: Clean and muscular, without throatiness, of fair length and gradually widening to shoulders.

LIMBS
FOREQUARTERS:
Shoulder: Long and sloping, well laid back, fine at points, cleanly cut at withers.
Forearm: Legs from any angle must be straight showing little or no appearance of an ankle in front. They should be strong in bone throughout.
Forefeet: Small, round and compact. Pads hard and tough, toes
moderately arched and turning neither in nor out

HINDQUARTERS:
General appearance: Strong and muscular, quite free from droop or crouch.
Thigh: Long and powerful.
Stifle (Knee): Good turn of stifle.
Metatarsus (Rear pastern): Hocks well let down.
Hind feet: Small, round and compact. Pads hard and tough, toes
moderately arched and turning neither in nor out.

GAIT / MOVEMENT:
Fore- and hindlegs carried straight forward and parallel. Elbows move perpendicular to body, working free of sides, stifles neither turning in nor out and hocks not close. Good drive coming from well flexing hindquarters.

FAULTS:
Any departure from the foregoing points should be considered a fault and the seriousness with which the fault should be regarded should be in exact proportion to its degree and its effect upon the health and welfare of the dog and on its ability to perform its traditional work.

N.B:
· Male animals should have two apparently normal testicles fully descended into the scrotum.
· Only functionally and clinically healthy dogs, with breed typical conformation, should be used for breeding. The latest amendments are in bold characters.